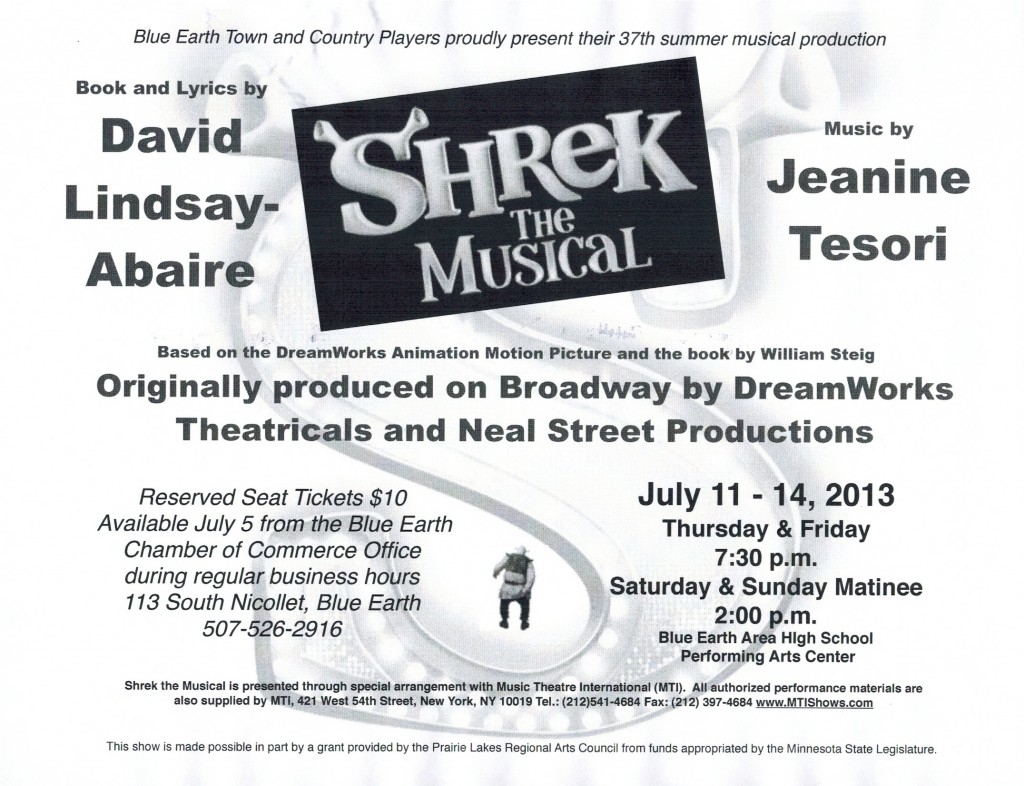 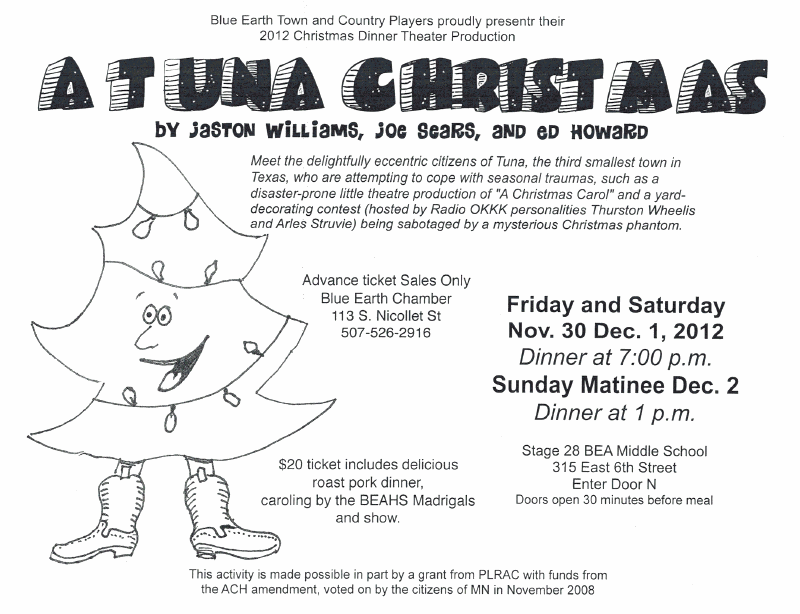 Tickets for “A Tuna Christmas” are currently on sale at the BE Chamber Office during regular business hours. The $20 ticket includes hot wassail, full roast pork dinner, Madrigal serenade, and, of course, the two-act comedy. Can’t get to the office—call 507-526-2916 to reserve your tickets. Show dates are November 30 and December 1 at 7 p.m. and December 2 at 1 p.m. This is one show you don’t want to miss!

Congratulations to Jolene Krussow, this year’s recipient of our Lifetime Member Award!  She has played violin and piano in many pit orchestra for both summer musicals and winter dinner theater productions. Congratulations, Jolene!

All sorts of news.  Auditions were completed for this summer’s musical, “Joseph and the Amazing Technicolor Dreamcoat,” and for once we had enough men!  We still need younger gals and child singers, however.  If you’re interested, please let us know!

The Patron Drive is humming right along—Treasurer Laurie reports that the contributions are strong AND the voting for Christmas Dinner Theater shows is running 3-1 for a new show (rather than an encore performance).  Tell us in the comments to this post if you would like an encore, or a new performance for Dinner Theater this year!  If you have ideas for shows you would like to see, go ahead and add a title.  We’d love to hear from you! 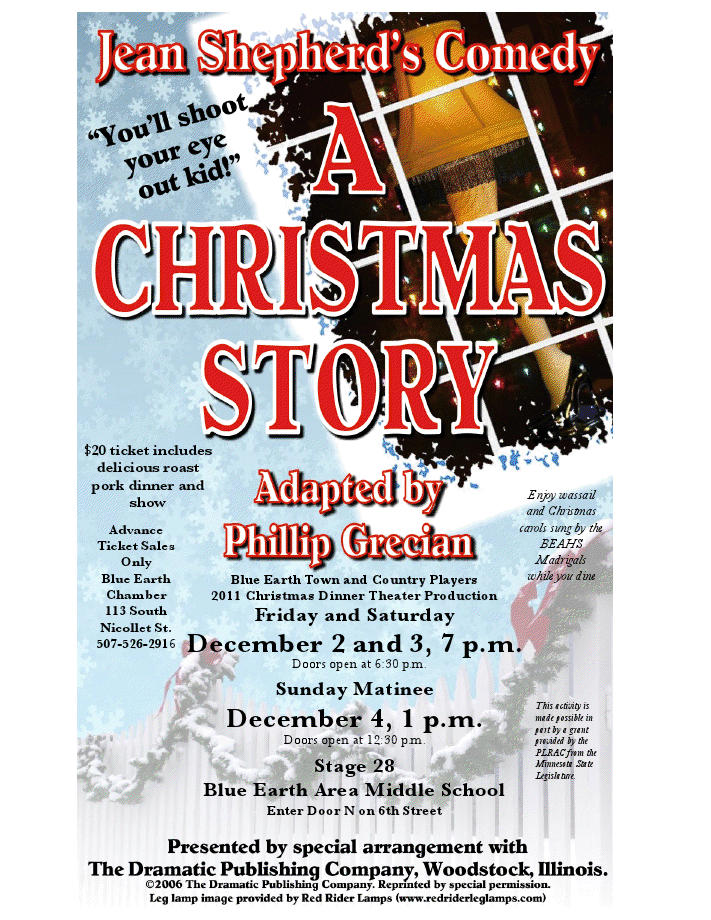 Get ready for the Blue Earth Town and Country Players’ 2011 Christmas Dinner Theater production of “A Christmas Story!”

The play is based upon the Warner Bros. motion picture, A Christmas Story, written by Jean Shepherd, Leigh Brown, and Bob Clark and on the book, In God We Trust, All Others Pay Cash, by Jean Shepherd.  “This play is adapted from the movie, so it contains much of the movie’s humor and charm,” explains Director, Nancy Steinke.

Humorist Jean Shepherd’s memoir of growing up in the midwest of the 1940s follows 9-year-old Ralphie Parker in his quest to get a genuine Red Ryder BB gun under the tree for Christmas. He pleads his case before his mother, his teacher, and even Santa Claus himself at Goldblatt’s Department Store with the consistent response being, “You’ll shoot your eye out!”
All the elements from the motion picture will be on stage, including the family’s temperamental exploding furnace; Scut Farkas, the school bully; the boys’ experiment with a wet tongue on a cold lamppost; the Little Orphan Annie decoder pin; Ralphie’s father winning the infamous “leg lamp;” and much more.
Show dates are December 2-4, 2011, on Stage 28 in the Blue Earth Area Middle School (enter through Door N on 6th Street).

Our summer production of  “Guys and Dolls” went very well, and everyone had a blast! Take a look at the photos to see more!

Considered one of the finest musical comedies ever written, Guys and Dolls is packed with one unforgettable song after another—not to mention loads of romance and charm to spare. With beloved tunes such as:

Bushel and a Peck

Luck Be a Lady Tonight

Sit Down, You’re Rockin’ the Boat

I’ll Know When My Love Comes Along 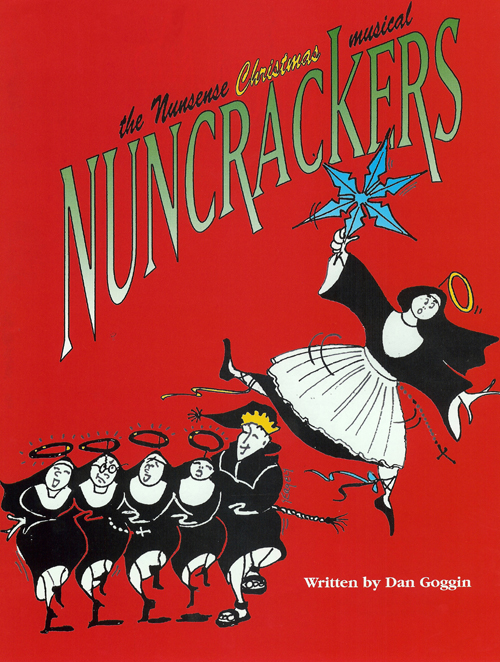 The three performances of “Nuncrackers” were very well received by the audiences this past weekend. The lovable Little Sisters of Hoboken and the adorable students from the Mount St. Helen’s School, along with the ever-helpful Father Virgil, had everyone laughing and even singing along during the T & C Players’ 23rd Christmas Dinner Theater. Kudos to the cast and crew!